Madrid’s proclaimed hygge district, Malasaña has no shortage of cafes, small pedestrian lanes and vintage shops to immerse yourself in. I decided to take a different route to Madrid for my first time and stay here, about a twenty minute walk away from most of the major sights in the city. I tried to get a feel for the neighbourhood by taking the long way to get the necessary errands I neglected to get over the past week in Malaga.

Whenever I travel, I always enjoy going into a variety of cafes to see the coffee culture in different cities. For me, I think it’s an interesting way to get to know a city and it’s people — and of course, enjoying excellent coffee. I asked around my hostel and checked out reviews on Google where there were interesting places, and I made a small mental list and decided to hop into places I found along my route.

Tucked away on a narrow cobblestone lane off the main thoroughfare in Malasaña, Calle San Bernardo, Toma Cafe is a cozy oasis from the city’s bustling streets, bright sun and vibrant atmosphere. To go to Toma, you have to know it’s theret; it’s unassuming, small sign tucked into the door makes it a pleasant surprise to see. A perfect place to wander into after a busy morning of exploring Madrid’s streets and plazas with its soft lighting and comfortable setting. 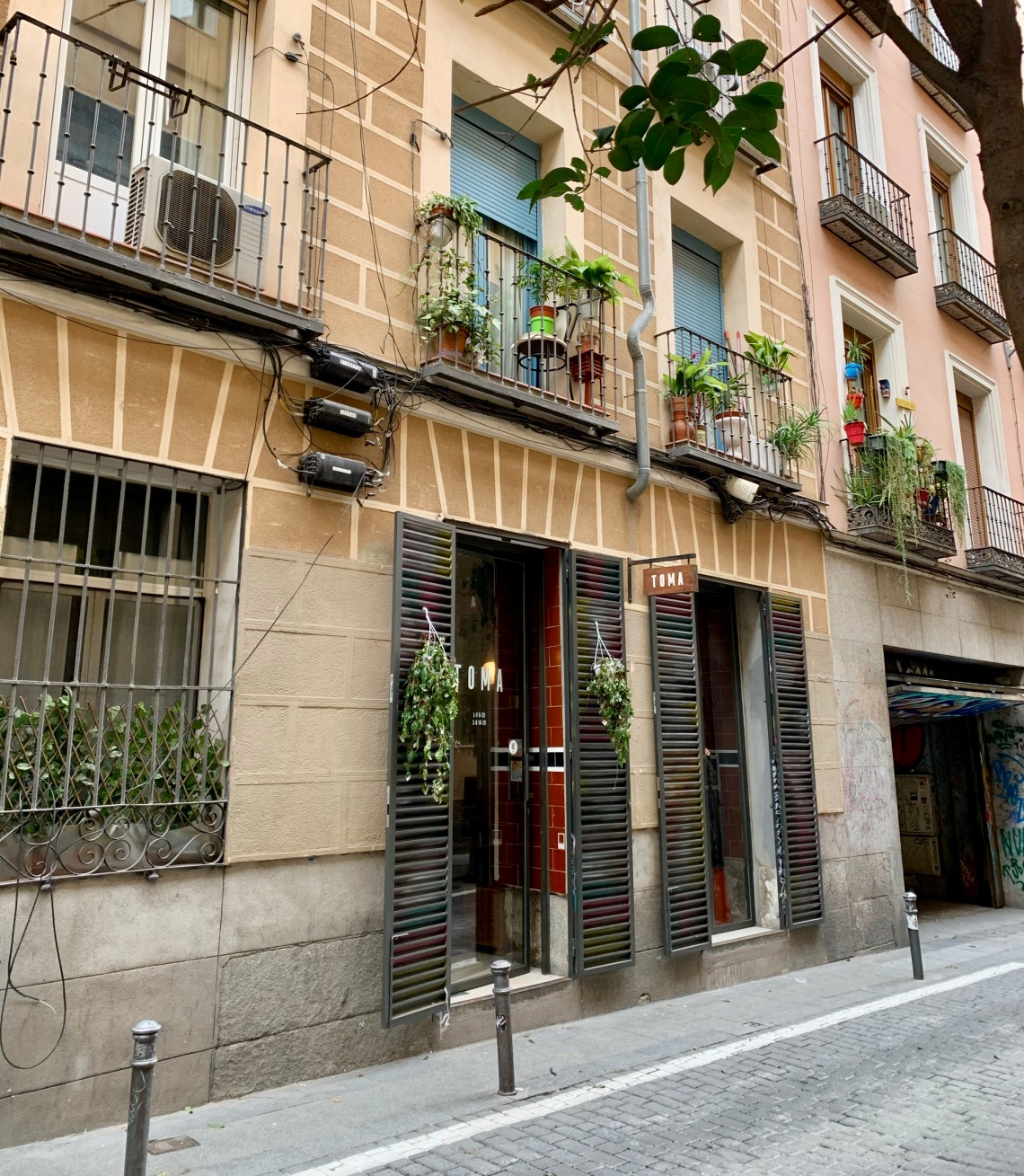 Upon walking in, it seems smaller than it is; the front area of the cafe is surrounded by artwork, white and brown subway tiles perfectly placed, and large glass doors, giving it an indoor-outdoor living feel, and a few large communal tables and stools. Despite the gorgeous decor and hanging plants, the spotlight is on the baristas, placed right in the middle of the cafe. Beyond the front seating area is a large quartz island with a bright light overhead, with each side of the counter completely utilized. One side is where to order and pay, one side is filter and cold brew coffee preparation, and another side has a striking espresso machine on it, allowing the barista to show his craft to the patrons around him. As I ordered my cold brew, which was probably one of the best I’ve had, the barista gently called out my name — which sounds much better in Spanish than in English. 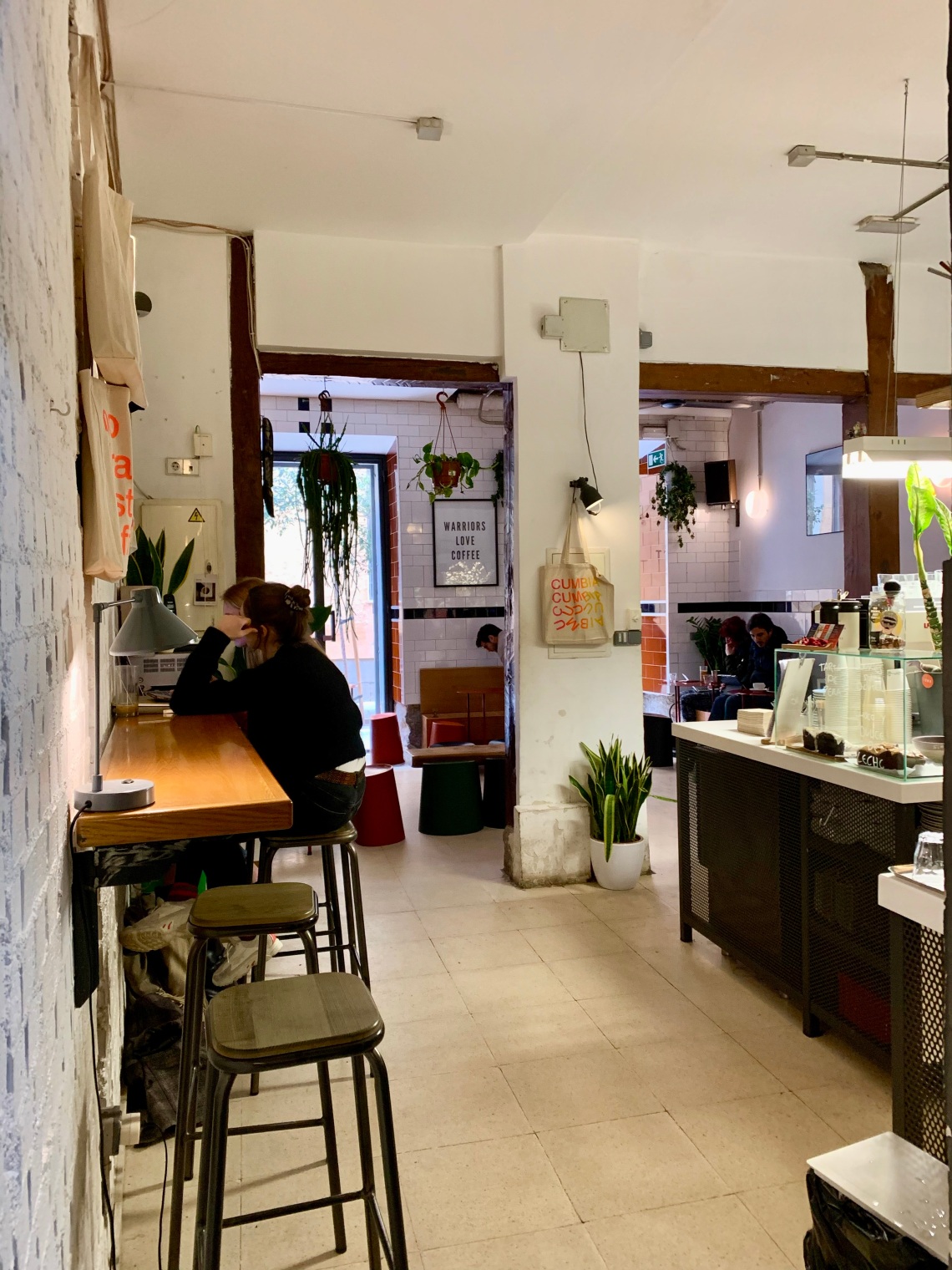 There’s almost every kind of espresso drink here, and a wide variety of customers who walk through that door almost every ten minutes. When I first arrived, there were a few older gentlemen standing off to the side with their well-used leather briefcases on the wooden table, getting their espressos for the afternoon and catching up, speaking quickly and full of life.  Throughout the cafe, there’s barstools and high wooden tables along the walls, with slow classic Spanish music humming in the background and the smell of freshly ground coffee permeates the air.

At that moment, with the music, I felt like I was in a completely different world. Back in Toronto, many trendy cafes have transformed into a study or co-working space, where people rely on free refills of coffee in order to get through their day. Toma seemed to embrace the slow lifestyle; the baristas took their time engaging with people and perfecting their craft, people here enjoyed their time. It made going into a coffeeshop a proper part of the day, rather than a stop along the way. It’s about enjoyment.

After being in Toma for a little over an hour, writing on and off, but mostly people watching and slowly sipping my drink, I left feeling relaxed and recharged to wander the Malasaña streets a little bit more.

A short walk away from Toma, Mahon is located in the Plaza del Dos de Mayo, a quieter square but still packed with small bars and cafes. Mahon is quiet, and very local from my first impression. I’d imagine in the summer it gets very busy, especially on the terrace, but in a gloomy March afternoon, it’s not a hotspot.

Mahon was filled with quirky, mismatched tables and chairs, a comfortable couch in a corner, and trendy palm leaf wallpaper scattered throughout. By the front doors outside, there’s large, colourful lettering shouting “BRUNCH” at anyone who walks by. It’s hard not to be invited in by the bright blue door and menu right there. 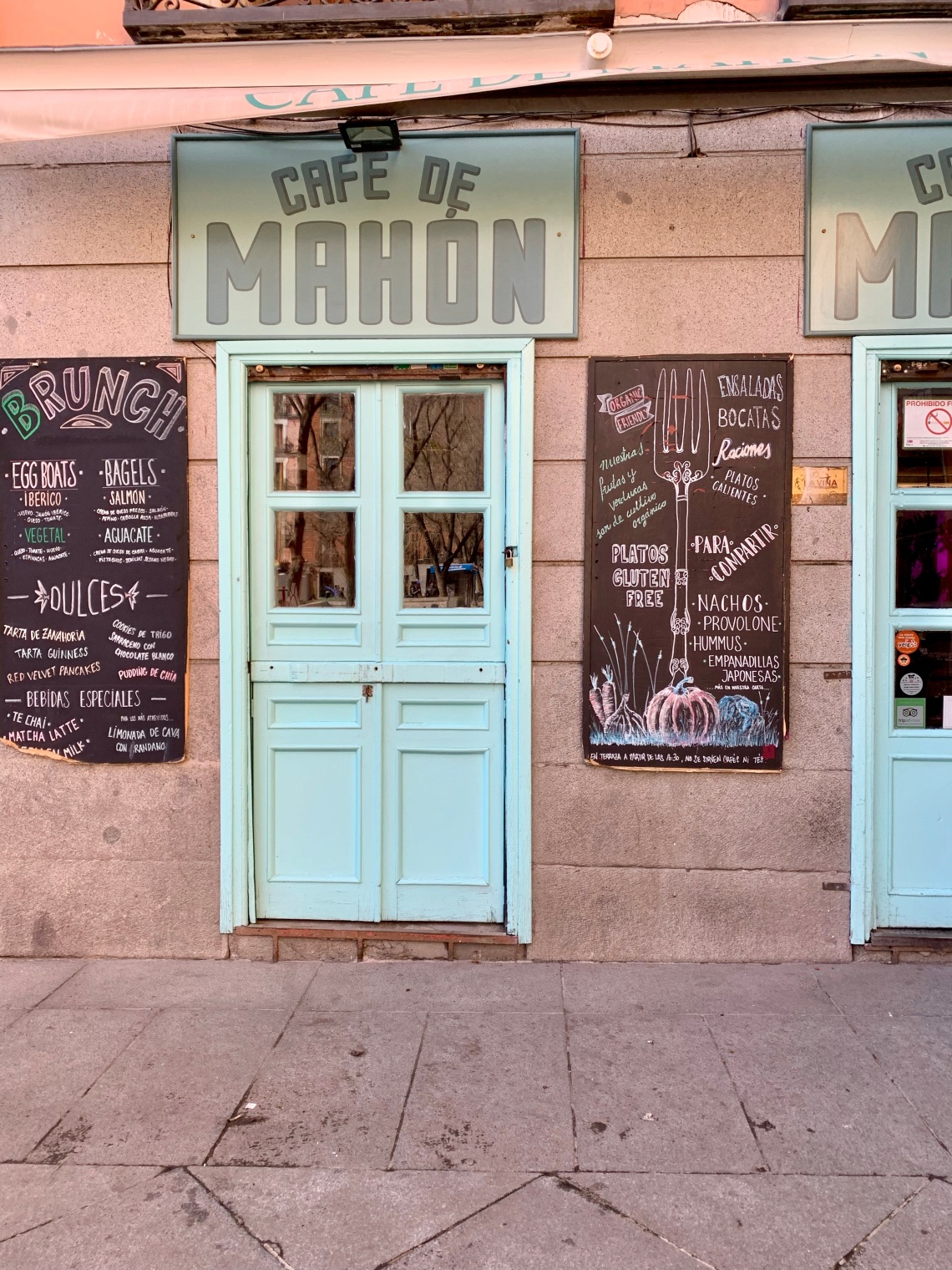 My gut was telling me that Mahon is a refurbished old pub, with its main focus being the bar and having a very distinct smell of an old building. Now, they have espresso, a wide variety of tea, matcha lattes — which are very good with oat milk here — but still have an extensive selection of alcohol, beer, wine and even margaritas.

As lovely as Mahon was, it wasn’t as comfortable like Toma. It’s been a cozy type of day, and even though I am strongly caffeinated (a coffee, a cold brew, and now a matcha latte), the only thing increasing is my heart rate and anxiety of all of my thoughts coming out, despite my best efforts. 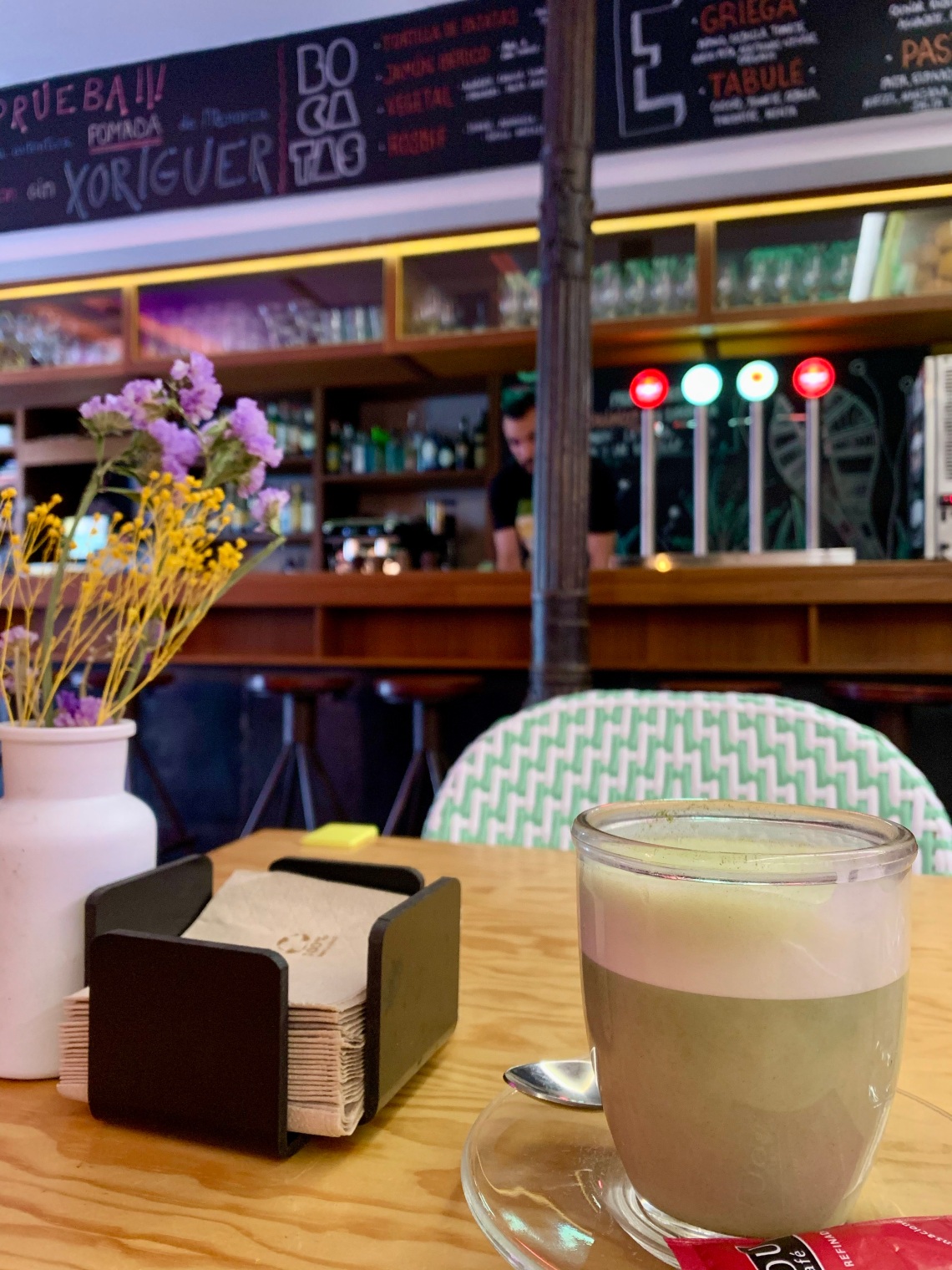 While I wait for my food and sip my latte, I can see the woman in the kitchen, hidden only behind a partially closed curtain, finely chop up the fresh avocado and tomato. After having only a marmalade filled crepe for breakfast at my hostel, I’m hungry, and excited for brunch — a meal I’ve been embarrassingly longing for since I got to Spain.

Outside of Mahon, the Plaza del Dos de Mayo is quiet with few people buzzing around. With a playground for children at the centre and benches for people to simply sit at and read or people watch, it became a bit busier when the sun briefly peaked out. With more than three people loitering there, it didn’t seem as eerily empty. 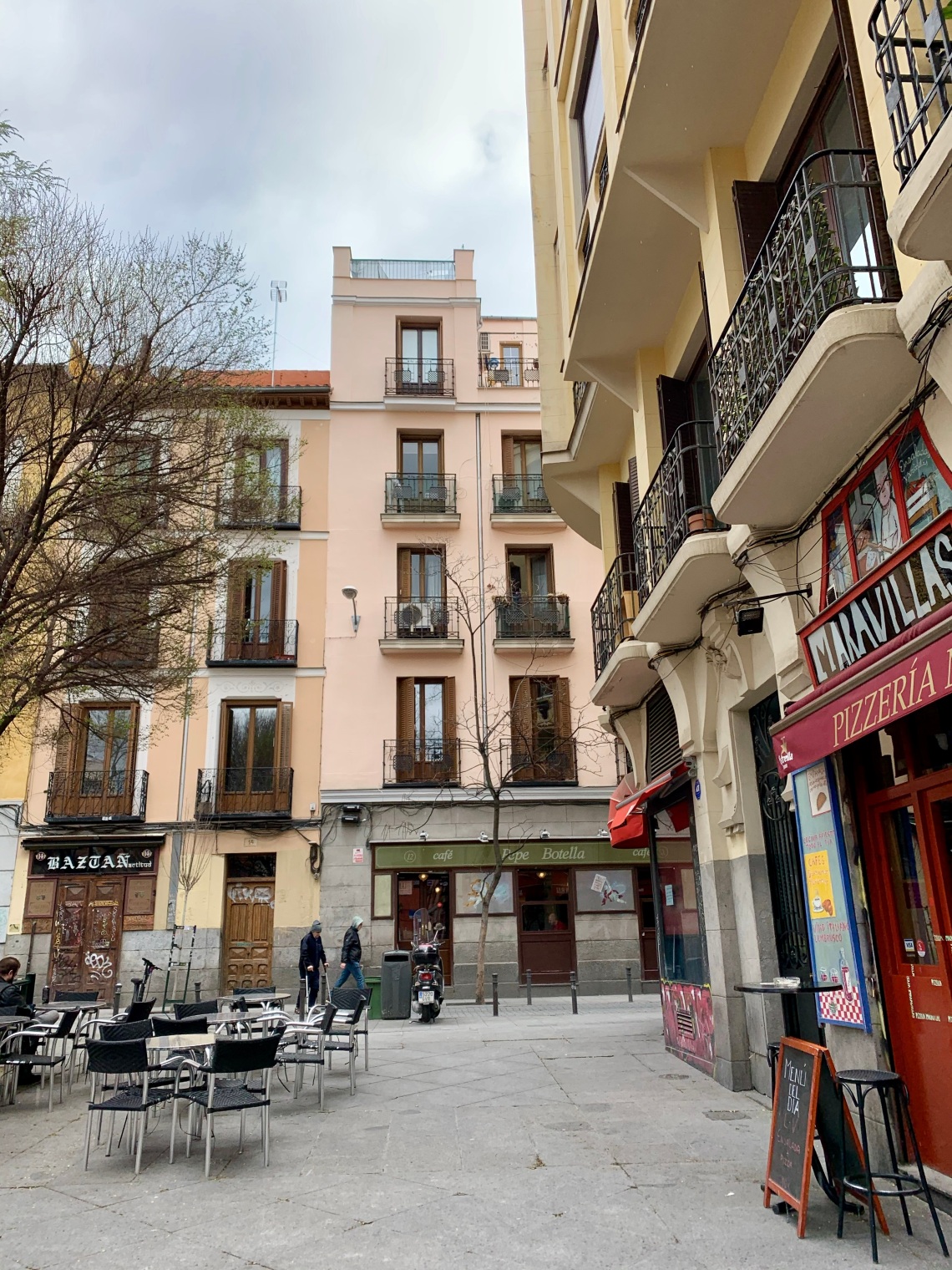 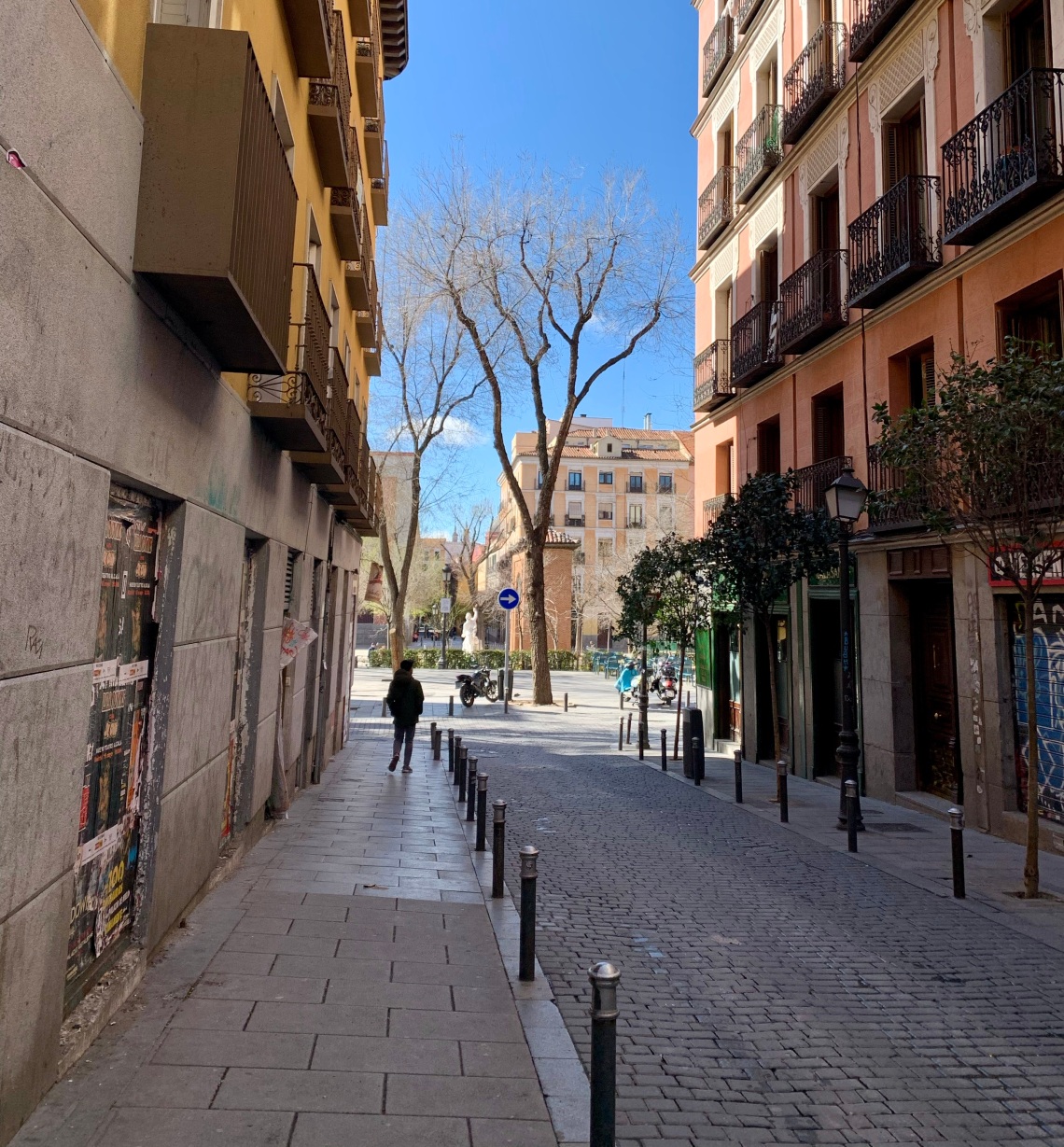 The heart of Malasaña is Calle de Fuencarral, a pedestrian area full of high end shops, cafes, bars and North American chains. Apparently, it used to be a quiet area where old folks gossiped and hung out their laundry over the balconies, but now, its littered with people strolling, vintage shops on side streets, and large trees throughout. At the end of Fuencarral is the major boulevard and the heart of Madrid shopping, Gran Via. Just like that, my view was completely transformed. For the entirety of the day, I’d been spending it meandering through small, one-way lanes and popping in and out of the many vintage shops Malasaña had to offer, and the grandiose of the buildings, and seeing the classic Schweppes sign at the top of an old colonial building, took me by surprise for a moment. This was the Madrid I’d imagined in my head, but not come to know right away. 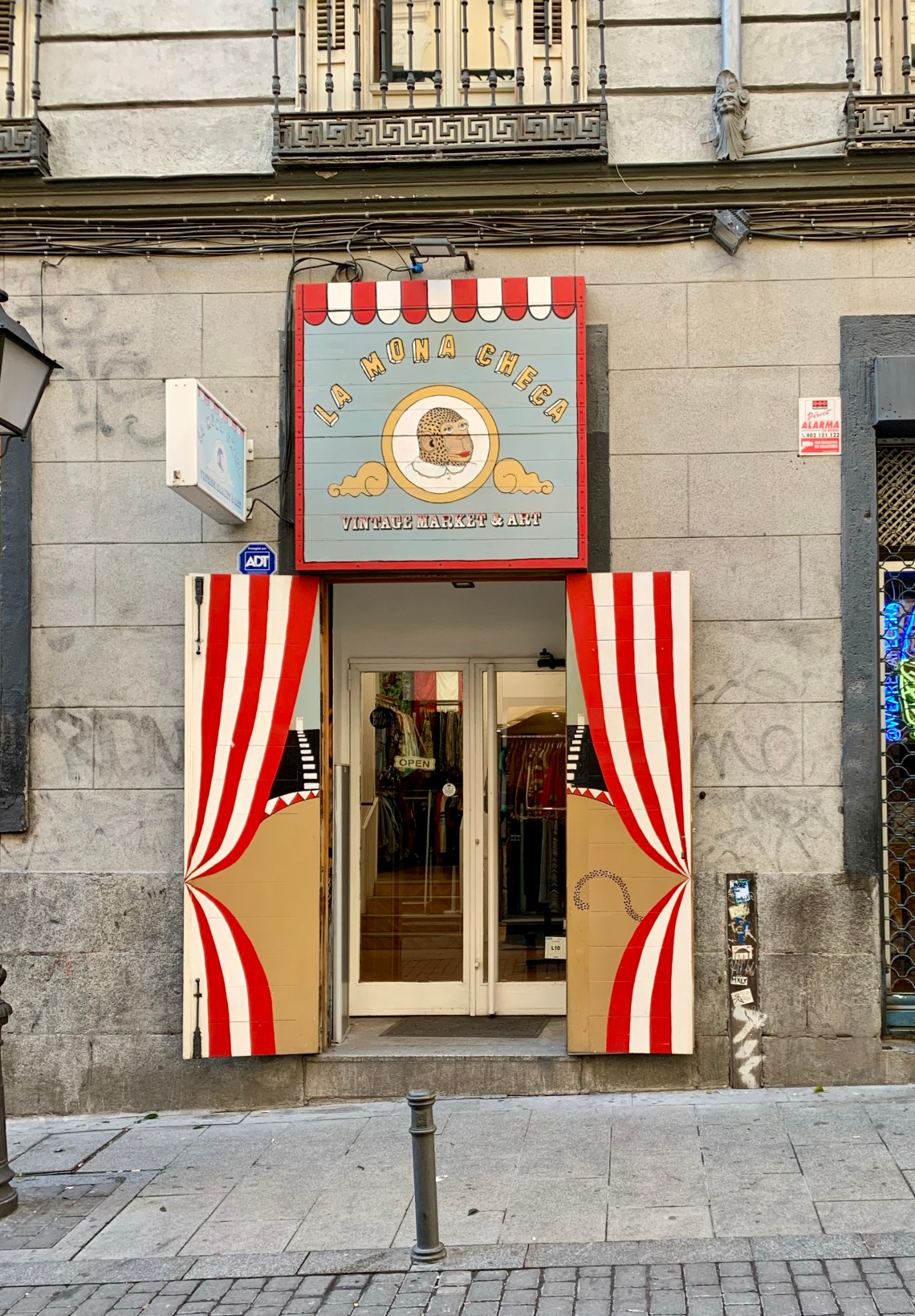 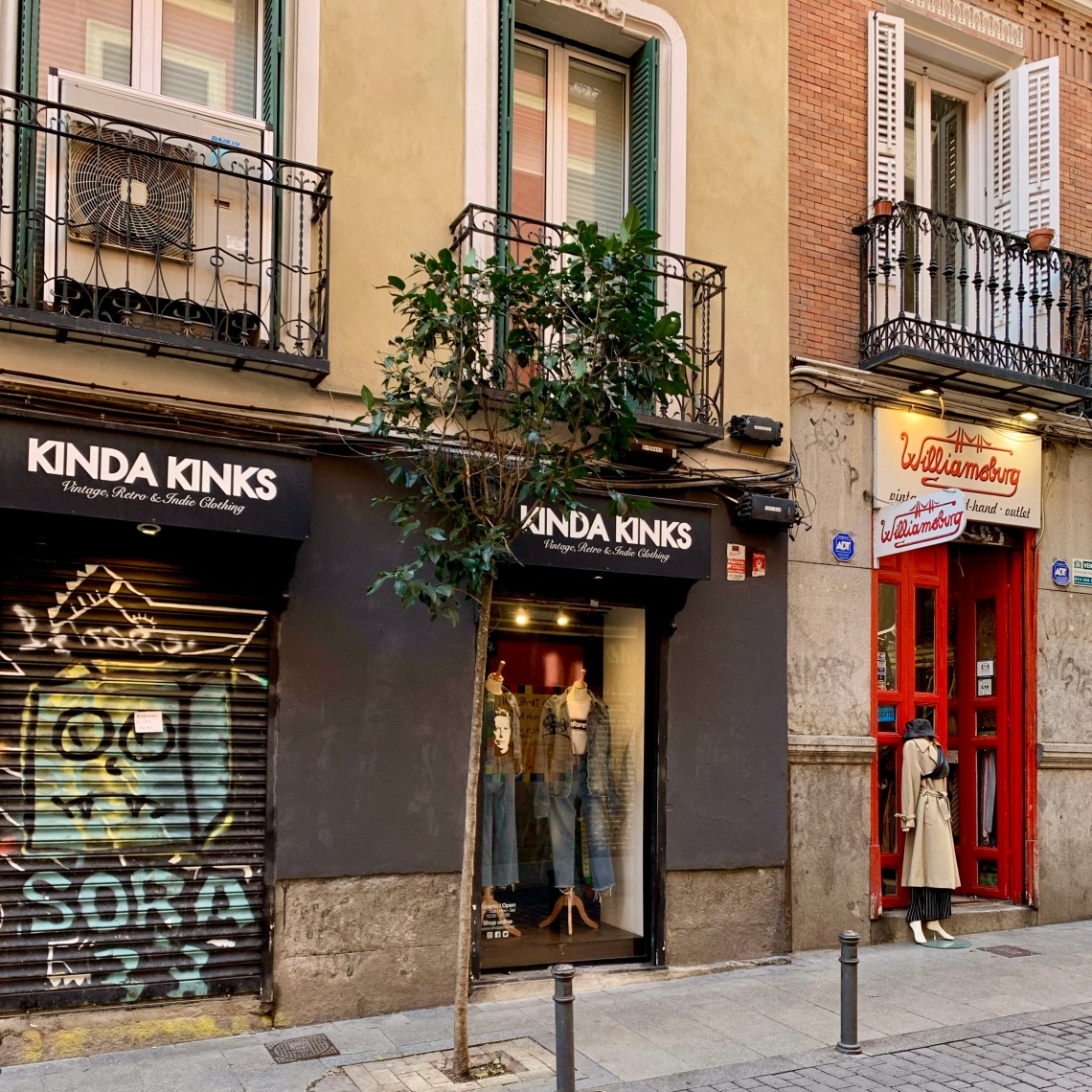 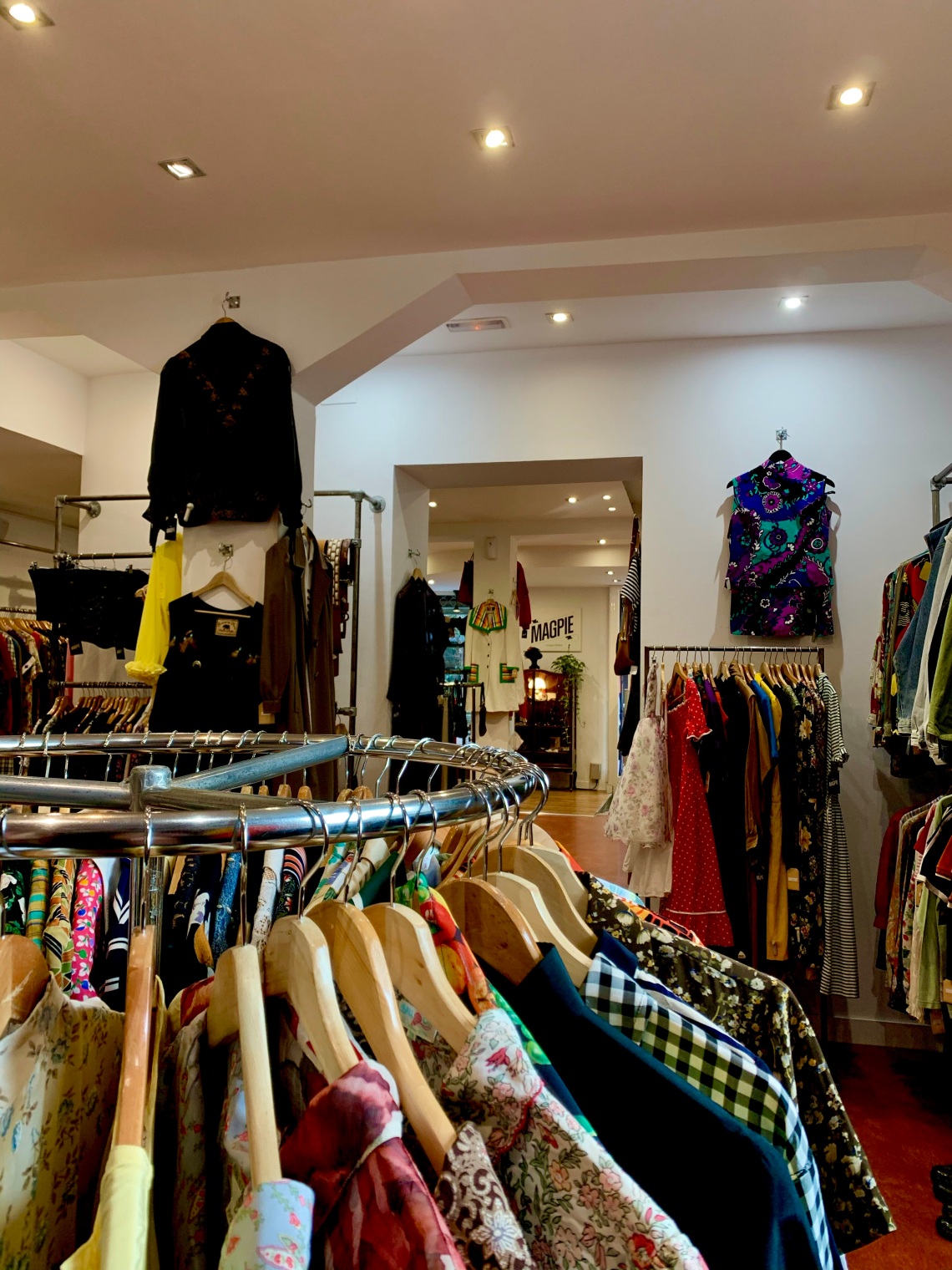 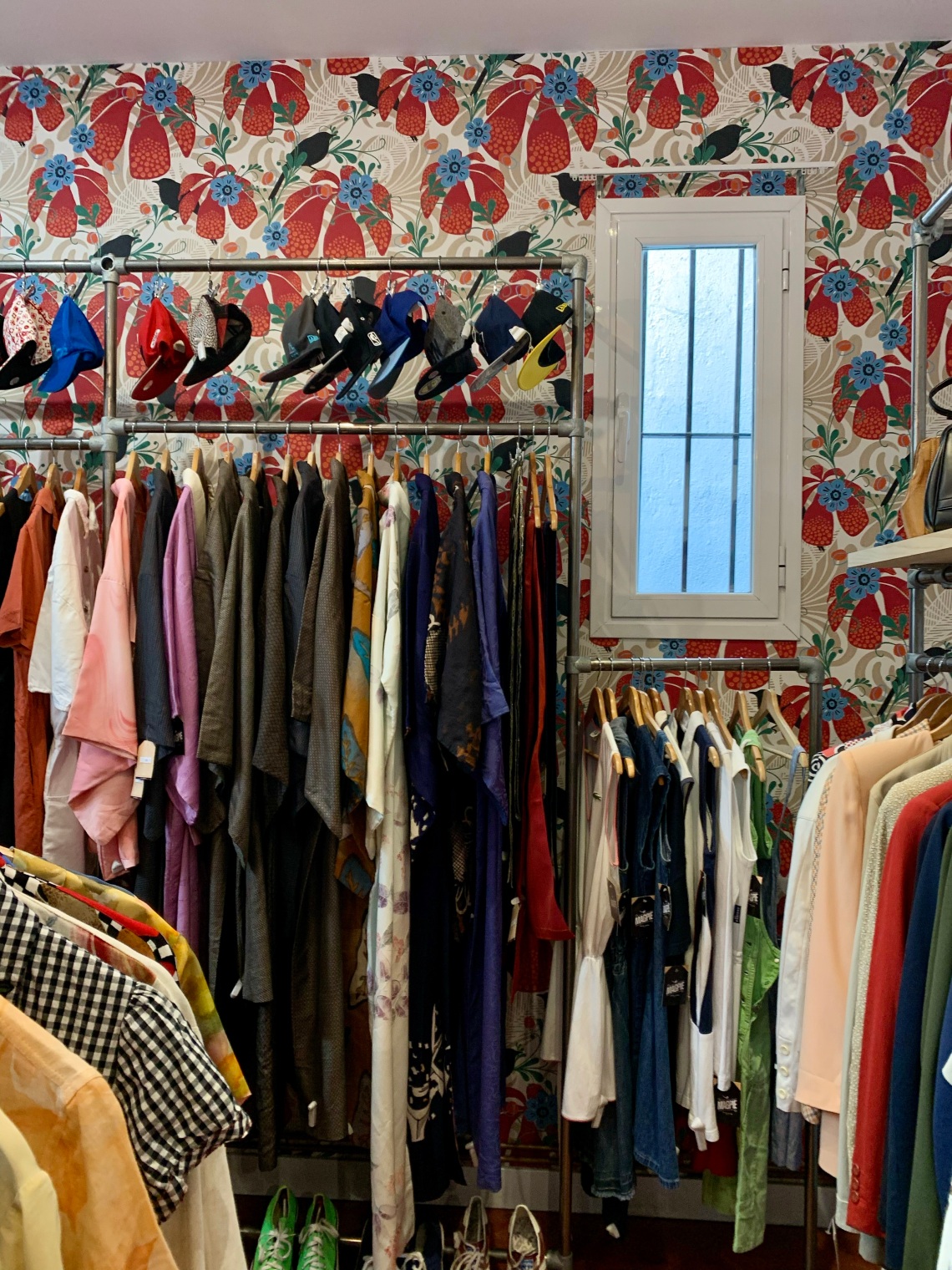 After spending about fifteen minutes strolling along Gran Via, I got the gist of how truly busy and big this city is, and I quickly zipped back into the small side streets off of Fuencarral and aimed to wander my way back to the hostel. It took me a minute to figure out why so many small shops in the neighbourhood were closed, and then I realized it was a proper siesta time. Unlike Gran Via, many things were shut, and the streets were quiet, with me being the only one on them on numerous occasions. Even with the bigger streets that looked like it had traffic had very little in reality, and the storefronts that usually had bright lighting and intriguing displayed were replaced with their graffiti-filled pulldowns. Despite walking a similar route earlier, it looked completely different. 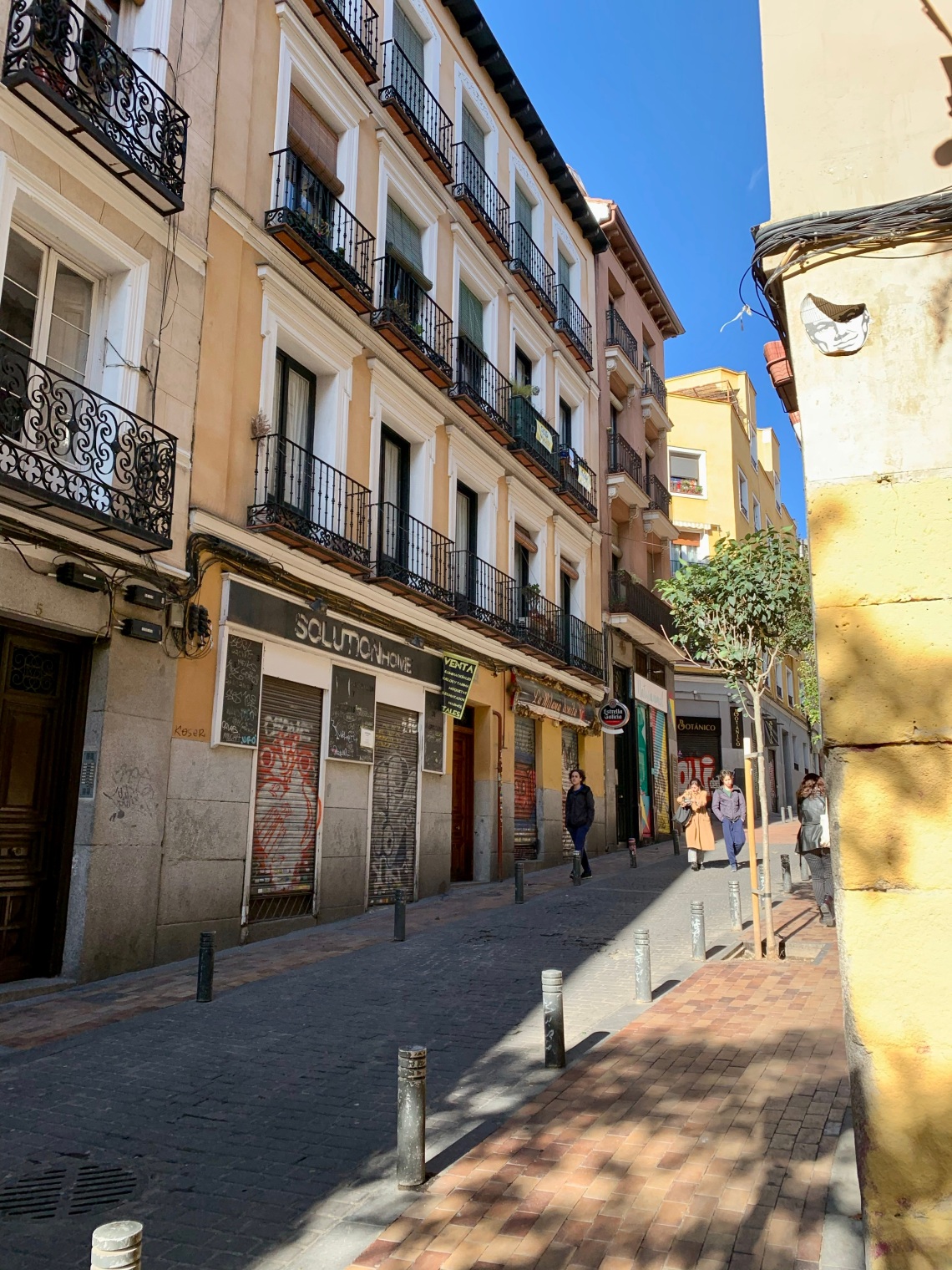 On my long, confusing, way back to my hostel I stopped by “J&J Books and Coffee” an English, second hand bookstore with a cafe and bar. She was was incredibly friendly and lovely to chat to, reminding me how interesting it is to learn about a city from its locals. The small corner shop was painted red ochre throughout with soft lighting framed with of old Cava corks. On the weekends, J&J’s hosts brunch events that are apparently very popular in the neighbourhood, but on the weekdays, it opens at 4 and people start to slowly trickle in. I arrived at 4:06 and blurted “Wow, its quiet!”  She explained to me that even though they just opened up, it was a bank holiday in Spain, the weather wasn’t great, and the time of year meant that parts of the city were like this. 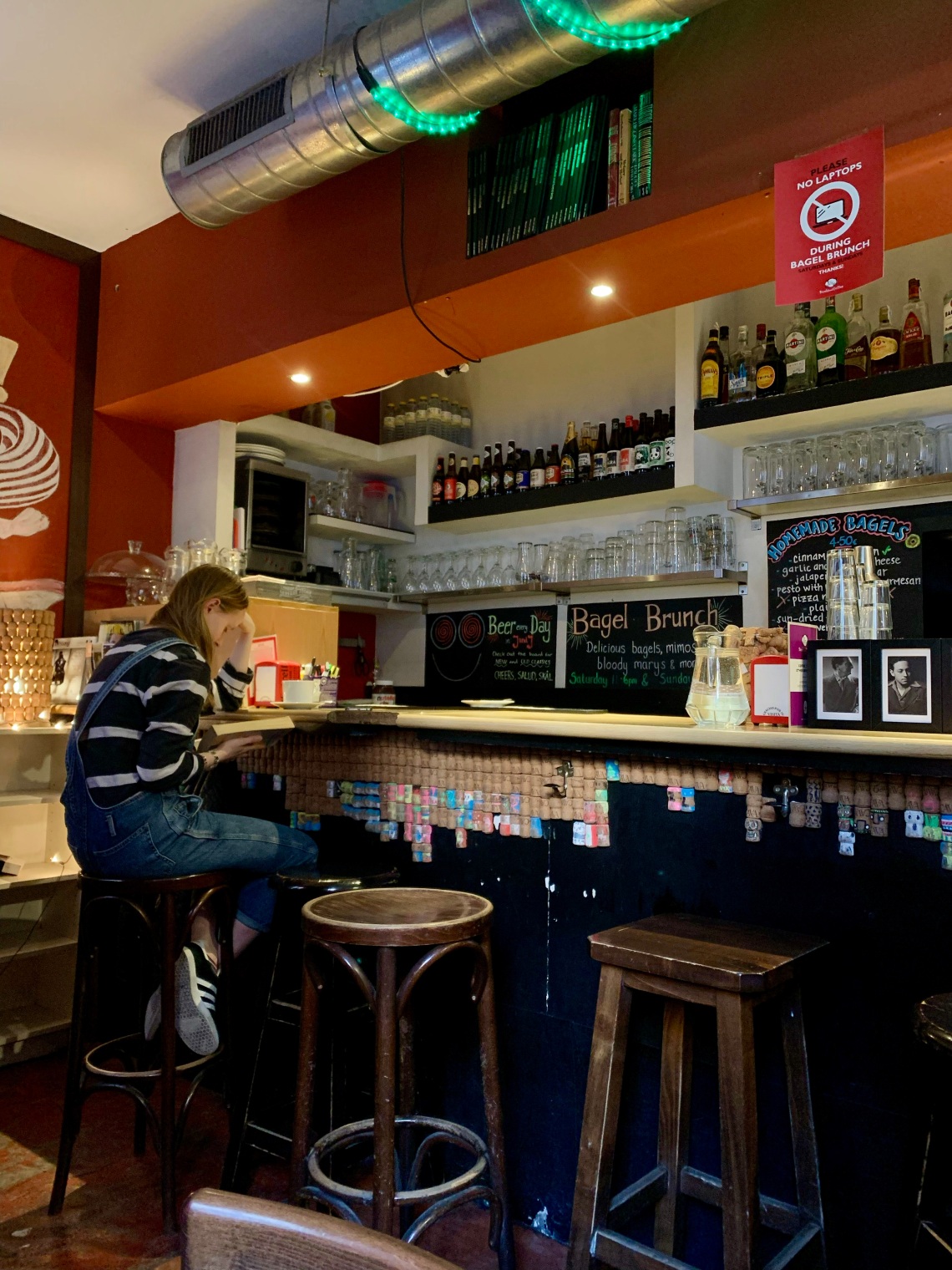 Although J&J’s wasn’t littered with trendy decor and a unique set up, I think I’d found a new favourite for a simple cup of tea and a delicious bagel, perfect for days when I’d be yearning for home. A pot of tea only cost 1.50, and tiny corner shop was filled with books in every possible nook. Despite being in Madrid, all of the staff speaks English (only 2 are actually Spanish), and the crowd — albeit small — is a majority of expats or students studying abroad. I felt like this was the type of cafe I’d go to when I was in Glasgow or Edinburgh. If it was raining outside, I’d feel right at home.

By the time I was finished at J&J’s, it was 6pm and I decided to make my way back to the hostel to relax for a bit and collect my thoughts. I could easily wander throughout Malasaña for hours and find something new each time, with entertaining and interesting stores and food markets in every tiny street.

If anyone wants a relaxing day with the goal of blissfully getting lost for hours, then I’d recommend Malasaña. It has good food, coffee, and endless shops to pop in and out of.